Skip to content
February 3, 2014October 24, 2020 Hannah
Last week while tucking my youngest into his crib I whispered a prayer over him in the darkness. It struck me later that the last sentence I prayed was not something I had prayed over my other babies.   It was a prayer that came from a place of knowing more than I’d ever known before. I prayed that I would get to see him grow old. That prayer came from intimately knowing that nothing in life is promised; a fresh scar from the gash of that loss.

There are many areas of my life that have been touched and changed by the loss of my daughter; areas that aren’t defined by what happened to me, but by what has happened -in-me. One of the most poignant events that reflected this was something I got to do for a dear friend of mine.

I met Candy and Dean and their 5 darling children when some friends of ours invited us to join them and a few other families every week at their home.  It was only a few short months after we had lost Ellie, and we were empty; hungry for  support, and needing friends who had the strength to help us through the difficult road ahead.  Candy warmed my heart immediately with her outgoing friendliness, her frequent smile, and her hilarious story telling. At the time, her youngest was a baby, and unlike other babes, he was content to let anyone hold him, without squirming or fussing to be handed back. Every time we met I would find an excuse to snuggle him in and feel the warmth of his baby softness heavy against my chest as we sang into the night. His sweet smile and puppy dog eyes warmed my wounded heart and empty arms.

As the next few years crept by and other hardships surfaced in our lives, Candy was quick to offer help, bringing meals and offering sweet encouragement and prayers.  She is a bright example of a compassionate and selfless soul.

This past summer, Candy announced that they were unexpectedly expecting a sixth member of their precious brood of little ones.  Although surprising, the anticipation of this new life was met with excitement and joy.

20 weeks in, it was time for the ultrasound to make sure all was going well with the baby’s development, and for Candy, a secret chance to sneak at peek at the gender that everyone else would have to wait for.  Instead of that eagerly anticipated black and white beauty of baby’s first photo, a heavy cloud of fear and sadness crept in. Candy and Dean were told their baby, another boy, had Trisomy 13; he was missing many necessary functions for life, and would never be able to live outside of the womb.

It was a heartbreaking, breathtaking reality. One that no one really knew how to face, but Candy and her family would have to.

I remember contemplating again that phenomenon of joy and pain coexisting. I listened to Candy express the JOY she felt while feeling his kicks and wiggles, and I witnessed her tears as each day brought her closer to a painful goodbye.  I wondered how torturous it must feel to know for so many weeks that the day was coming, so different than the unexpected whirlwind loss I have known. I watched Candy’s strength as she chose to embrace every happiness she could of knowing he was still with her, and I doubted I could show such bravery if I were in her shoes.

This was the first time I remember thanking Jesus for what I had been through. Not thank you that Ellianna died, but thank you that because of it I could reach out to Candy in a way I never would have known how before. I know how desperately I long for others to acknowledge my daughter’s life; to say her name, to not ignore that she was here for four and a half glorious months. So I listened carefully to the importance behind his chosen name, Beau Emmanuel. I prayed for a miracle, and I prayed for grace if that miracle didn’t come in the way we hoped. I anointed Candy’s beautiful belly with oil, and prayed for her and this delicate but lively little boy whose life could be seen and felt beneath her skin.

We prayed, we cried, we made memories. I helped her think of things she would need to plan a memorial service for him, and made keepsakes to have small daily reminders of his presence in their home. I implored her to lean in, embrace, and take hold of every remembrance she could, because some day when her belly had melted away, those memories would be the best of what she had left.

As the week count grew longer Beau surprised everyone by his determination and strength; he was holding on and fighting for day after day safe in his mommy’s womb. We wondered if he would make it all the way through after all. We smiled longingly at the thought that maybe, just maybe his parents would get to meet him while he still had breath in his lungs.

Despite our hopes, days came when Candy began to feel weary, tired, and sick. Beau’s movements slowed down until one morning his strong kicks had faded to stillness. Ultrasound confirmed his mighty little heart had ceased to beat. It was such heartbreaking news even after the long anticipation. It sank like rocks.  Again my mind marveled at Candy’s fortitude as she bravely and calmly faced the strenuous labor that would bear a newborn without a cry.

I was honored and humbled when Candy asked me to be present at his birth and capture his moments in photos; the only photos they would have of their youngest boy. I never hesitated; I knew it was a great responsibility, as I hold dear the photos I have of my own baby girl.

The day came, and with prayerful reflection and a pounding heart I slung my camera over my shoulder and headed for the hospital where only moments stood between the unknown and the reality of his appearance. It seemed so unnatural to behold the absolute quiet of a birthing room that usually was filled with the sounds of new life and great joy.

There was an intense peace that filled the room that could only have come from the hands of God. Candy’s gentle brokenness flowed down her cheeks as Dean stood near, beholding the beautiful, yet lifeless bundle of their son, Beau Emmanuel.

The next few hours were heavy and sweet as I clicked away, capturing these moments of hello and goodbye. Dean and Candy absorbed every detail and feature of their newborn as they helped wash, dress, and finally snuggle and kiss this little person who had already captured their hearts. It was an intimate, crushing, priceless, holy snapshot of eternity that I got to witness, as if standing on holy ground. It blessed me to try to give something, anything to another mama reaching for something to cling to in the life-shaking aftermath of losing a child, and how sweet for me to get to love on him and kiss his beautiful little cheeks. 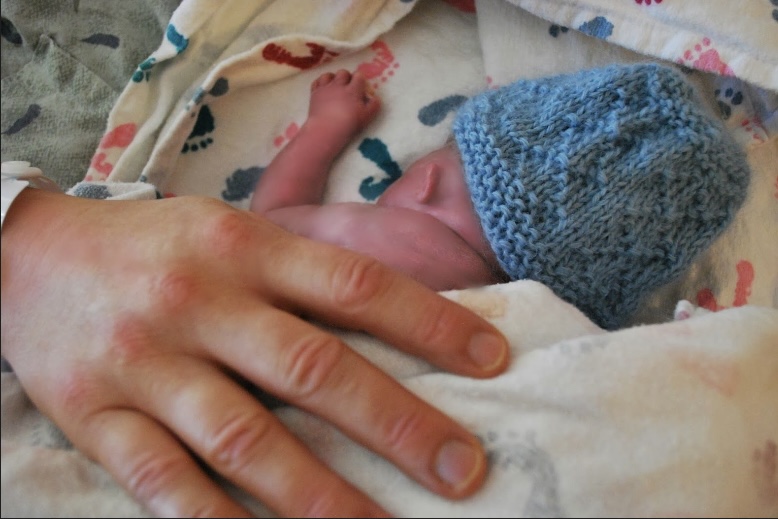 Remember how I’ve said God doesn’t waste pain?  I hated, hated that someone I love was having to face this tragedy, but I was so grateful that God would use my pain, my healing, my hope, to come alongside my friend and help her survive the impossible just like I am; one day at a time.

Only days after Beau’s memorial service, Candy came to me looking for an outlet to share her story. This brave and compassionate woman already knows that she wants to help other moms going through what she is. Candy expressed how hard it was to have so many questions and unknowns about being pregnant with a baby with an unsurvivable diagnosis. She wants to minister to other moms by sharing her experience.

Here is a link to Candy’s new page: Click Here. Please stop in and read Candy’s story in her own words, and if you know other families dealing with a life-altering prognosis during pregnancy, please point them to her as well; they will surely find comfort and strength in her and her story.

4 thoughts on “Nothing Wasted”