It is hard to know where to start; my heart is so heavy…

Several weeks ago, I felt like I heard a difficult question in my heart. “Would I be willing to give Ellianna back to Heaven if it meant salvation for someone else?” Struggling to understand if this was even God, or if I had just made it up, I replied with an angered “NO.” Why would God even ask that of me? Ellianna already seemed to have crossed the scariest bridges and we had seen such healing in her.

Last Tuesday, Ellianna was fussy in the evening. She cried like something hurt her and she was not very interested in eating. She already had a check-up scheduled the next day, so I gave her some Tylenol and found she settled if she could stay snuggled against me. She slept restfully in my arms through the night, waking only briefly. The next morning she was frighteningly pale and refused to nurse and hardly sipped from a bottle. She screamed whenever we moved her. I felt panicked. Ellianna’s weight check was scheduled for 1:00 in the afternoon. We were expecting them to tell us she needed a feeding tube again because she just wasn’t gaining weight.   Worried about why she seemed so sick, we called to see if they would get her in sooner, but they said that was the only time they could see her. I had planned to spend some time with a friend that day, and since Ellie was calm and comforted laying on Mark’s chest on the couch, I headed out for a few hours before coming back to take her to the doctor.

By the time we got to the doctor, there was no denying something was WRONG, and I wasn’t going to let them just send us away again. I didn’t even have to plead though. When the doctor came in to see her, Ellianna was just lying there, hardly moving, constanly whimpering this pitiful, guteral groan. I was in tears. “Something is wrong, this isn’t her. Please DO something.”  We were sent right to the emergency room.  I didn’t even wait for the ambulance.  I told her doctor, “I can have her there before the ambulance even gets here to pick us up.”

Half an hour later we were settled in the emergency room. Once again, nurses were poking and poking, trying to get an iv, and finally giving up and putting in a feeding tube because “this poor baby just needs something to eat!” I bit my tongue, holding back the verbal lashing I wanted to unleash on these professionals who seemed so blind. I knew there was something else going on.

The pedicatric neurosurgeon was out of town…again. Finally an adult neurosurgeon came to examine her, and it took him about 5 seconds to see that there was a problem with the shunt in her brain. It wasn’t working. By this time, Ellianna was dfficult to awaken. She was just sleeping in my arms.  The surgeon told us he would have to do surgery to fix her shunt, but they needed to stablize her first.

Finally in the PICU they were able to get an iv started and get her some fluids to prepare her for surgery. I sat as still as I could holding Ellie. She whimpered every time I moved her at all. It broke my heart to know she was in so much pain. I sang to her, every song I could remember… hymns I learned as a child, and the song my mom always sang to me. I kissed her soft cheeks and told her it was going to be ok; that they were going to fix it and she would feel better soon.

Mark came with her sisters to see her before surgery.  We both almost came unglued when they came in and said they had to poke her AGAIN for more blood because they must have mixed up her blood with someone else’s. “That couldn’t have been hers,” the doctor said, “she’s not that sick.” Big surprise when the next set of blood tests came back with the same terrifying results. Nurses were scrambling to start another blood transfusion before they started the surgery.  Our girl was very sick.

Since our oldest son Jacob was away at camp, it was Mark, Baylie, Bella, and I that walked Ellianna down to surgery. I remember this looooong tiled hallway…the four of us holding hands as we walked…and I looked back and thought, “I bet this whole hallway could be filled with all the people praying for us right now.”

Mark sat with the girls while I walked Ellianna back to surgery. In the holding area she was crying and I couldn’t hold her. She was posturing with her arms and legs and my medical background screamed the knowledge of what that meant. I wanted to be hysterical, but as the first tear fell, the nurse who was waiting with us grabbed my shoulders. “No,” he said, “She needs you. You’re stronger than that. You’ve got this.” And then they took her. The tall metal bars of her crib and all the pumps and equipment surrounding my sweet little symbol of grace.

Once we got news that the surgery went fine, Mark took the girls home for some sleep and I went back to the PICU to wait for them to bring Ellianna back to her room. She remained sedated with a breathing tube, but in a way it made me feel better that she was peaceful. Now, I thought, we heal.

She looked better. The shunt had been fixed, she was pink again from the blood she had received, and her vital signs were more stable. The surgeon said the fluid in her brain had looked cloudy so it was sent off to be tested.

The worst was still ahead. Within the hour the results came back saying she had the most serious kind of infection, and she was to be taken back to the operating room to remove both of her shunts and put in an external drain to wait for the infection to clear. Mark was already tucking the girls in at home and was hardly able to move because of his recent back injury. He had to stay at home and wait for any updates. A couple good friends came by and stayed up through the night with me. 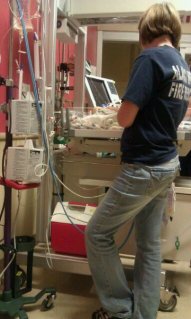 Back from surgery the second time, Ellianna was kept sedated.

Early the next morning I could tell the doctors were concerned about something. I don’t think the neurosurgeon even looked at me when he said “This is serious, and it may be that she won’t survive.” I was stunned, and Mark made arrangements to hurry back to the hospital.

We stood with close friends as they told us that her CT scan showed 50-60% of her brain had already been destroyed. We were shattered, broken, gutted. I cried with her physical therapist who came by to see her. I told her about what I thought God had asked of me. I told her I felt like as soon as I said “yes” to God, she would be gone, and I was not going to do it.

It was not long after that report that the horrible reality started sinking in. We watched in horror as her heart rate slowly dropped lower and lower.  Early on in the NICU, her heart rate would drop and all she needed was a little stimulation and that number would jump right back up. “Rub her!”  I shouted at Mark.  But this wasn’t the same; the number continued to plummet. Beeping and dinging and running feet, and CPR was begun. Mark and I stood helpless in each others’ arms, watching her slip away. That’s when I felt it. An overwhelming peace. A peace in saying “ok, You can take her.” I didn’t want that peace though. I wanted to scream!  I hated that I felt that way. But it stayed.

After a few minutes, her heart beat came back and she stabilized. We sat in shock and disbelief. Then it happened again. More CPR, more helpless watching and crying, and then her heartbeat was back again. At this point the doctor told us—even if they kept bringing her back, there was really no chance of neurological function. Through our tears we knew we just wanted her to go in peace in our arms, without anymore trauma to her tiny body. They took everything off except the breathing tube, wrapped her in a blanket, and placed her in our arms.

We cried tears from the deepest places within us. Mark said “I’m sorry I never got to take you out for lunch on your birthday” and he did “Twinkle Star”, a bedtime tradition in our house. I told her how much we loved her and asked her to send butterflies for Baylie. We could tell she was gone, and asked that her breathing tube be taken too, so we could hold just her and see her precious, most beautiful face. I have never had emotion more raw or so deep. My chest felt physically crushed.

I started to feel frightened by watching her color change.  Her nurses took her back to her bed and made impressions of her hands and feet for us. They let me bathe her and my tears would not stop as I gave her her last bath and combed her sweet smelling hair into one last mohawk. By this time she looked more peaceful. Like a delicate porcelain doll, and boy did she look just like her daddy with all of the tubes and stickers removed from her sweet little face! We held her again, as long as we could until they came to take her to the funeral home. Setting her down on that stretcher broke the last piece of my heart and we sobbed as they took her away.

I have more to share about the days that have followed since then, but for now I am so drained from these exhausting emotions. Please stay with us, share in our grief, smile in our memories, and hold us up as we make it through this most impossible of weeks. We are thankful for so many people who are surrounding us in our time of heartache. 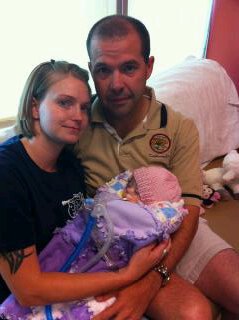 Please leave me a comment; it lets me know you’re listening!

32 thoughts on “The Day The World Went Wrong”